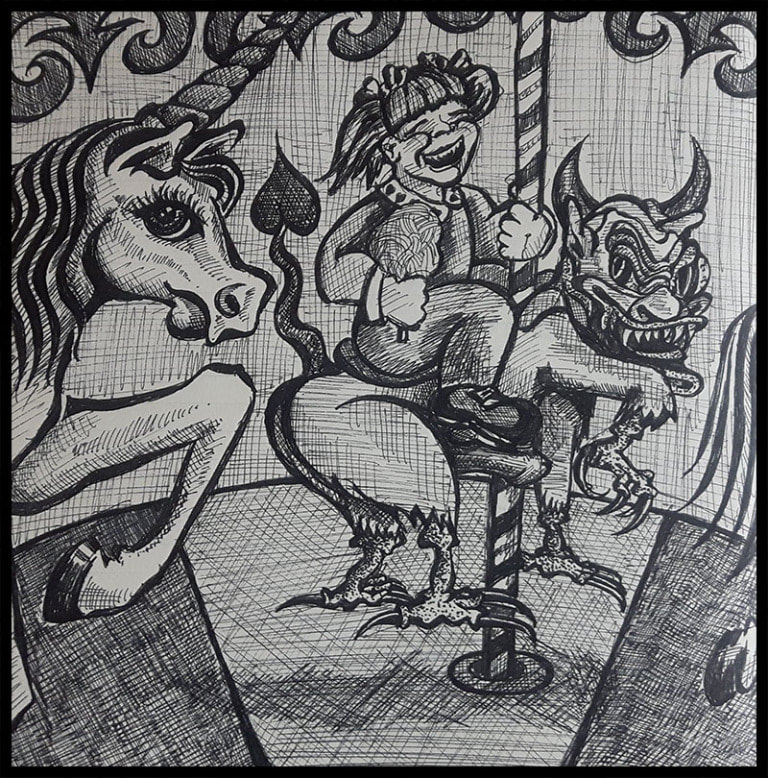 As I nurture a fragile recovery after a long dry spell, I am becoming mindful of patterns in my creative cycle. This week I had a pivotal insight: capitalist culture, with its emphasis on product over process, has been profoundly undermining my self-expression.
​
To give a little background, I’ve nailed down my creative cycle to six basic phases.

Something I’ve noticed about the world niggles. It niggles for a while. Then it suddenly assembles itself into something that can be communicated to others – a story, a painting, a song, an essay, a performance. It demands to be made so it can be shared.

When I experience this epiphany, I begin to assemble whatever form of art the niggle has demanded. With reckless enthusiasm, I throw everything into the project. I am wary of anything that might slow me down. I want to get as far as possible before the final stage of this cycle

Once I’m well stuck into it, I think about the thingy, whatever it is, all the time. But I can’t necessarily directly work on it every minute of the day. So I surf the net for advice on how to make my thingy as exceptional as possible. Nearly all of this advice is strictly oriented around the concept of selling the thingy when the thingy is done.

I come back to my thingy with a critical perspective. How well does it conform to the standards for the genre or style? I know, for example, that I am writing a Pixar-esque, four quadrant, sci-fi / comedy feature film. That’s an exceptionally marketable type of film. It could be worth more than a year’s salary to me if I succeed. One would think that would be very motivating!

I contemplate everything I’ve done so far, asking what conflicts with the objective of eventually selling my thingy in the appropriate market. The last script I started died at this moment, twenty pages from the finish line, right after I wrote the climactic scene. It was a dystopian birth control thriller and there’s no market for such a thing.

Once I am certain I’m working on a marketable thingy and everything about it conforms to the standards for the genre and style, I suddenly lose every scrap of enthusiasm I ever had for doing it in the first place.

I start about twenty projects for every one that I finish. On the up side, the projects I finish tend to be modestly successful. On the down side, I tend not to finish the most innovative projects I come up with because they have no market.

The first feature length script I wrote was so bizarre that the film school instructor who was offering advice on how to move forward with our own projects just handed it back to me. He said “I don’t know what to tell you”. I was the only student who received no advice at all. Not even “This could use a rewrite.”

It’s pretty clear to me now where my projects go off the rails. I don’t know why I never saw it before. As soon as I emerge from my chrysalis of stewing creativity and look at the relationship between my inner and outer world, the outer world squishes my creative impulse like a bug.

Now I understand why.

Nothing undermines my creative process more handily than the spectre of an eventual sale. Whatever my thingy is, my niggled subconscious didn’t demand for it to be made because it wants a TFSA top-up. I started out with something to communicate – something I felt was not being adequately communicated already.

Through the lens of capitalism, a half finished novel, a song that will only ever see the camp fire jam, or a bad painting are not just inconsequential, but embarrassing. The trope of the “struggling artist” is embraced by most of our peers with contempt and condescension. An artist only becomes “respectable” when their work sells, and sells well.

This market-based approach to creativity leaves no room for the niggle – that original impulse of social criticism that forms the bedrock of every artist’s urge to communicate something too complex for a bumper sticker.

Creativity is a process, not a product.

Understanding that capitalist culture is fundamentally flawed in its approach to art, I believe I can undermine my cycle of flame and fizzle.

The trick is to remember that the reason I’m making thingies is that I enjoy it. I enjoy it a lot. I enjoy it so much I would like to do it all day long, every single day. I enjoy it like a two year old enjoys finger painting without a care in the world for how much it might fetch at a showing.

I believe immersing oneself in the creative process is a fundamental human need. The creative process in this sense includes activities not typically considered “art”, like gardening or tinkering with cars. It’s possible that this is only true for some folks and not all, but I personally feel that anyone who denies it is just broken.

From this perspective, it really doesn’t matter what I’m working on as long as I am engaged in the process. It doesn’t matter if I finish it, if it’s any good, or if anybody else will like it. The primary benefit of engaging in the creative process is the uplifting impact it has on my mood. The prospect of making a “marketable product” is not even secondary – it is not on the list of benefits at all. If anything, it’s a hindrance.

When I taught music, I told my students it only takes five or ten years to become quite good. If they were daunted, I would argue that those years will pass regardless of whether or not they learn an awesome new skill.

I also emphasized the necessity of practice. I told my students they were wasting their money if they wouldn’t practice. There is simply no way to become any good at anything but by practice. On the other hand, when one practices, it’s only a matter of time before one becomes good.

Being good at things is its own reward.

When we are learning a skill like yoga or ballroom dancing, we don’t think in terms of monetary reward. But paint a picture or write a short story, and nobody knows how to take it except by assessing its dollar value and dismissing it as a waste of time.

From this day forward, I will approach the arts as a skill that I must practice because I enjoy it and I would like to become good. I pledge to nourish the niggles that inspire all my thingies, to allow myself the freedom to explore and to fail.

With this new perspective, I no longer need to be ashamed of all my unfinished, bad or bizarre thingies. They are not a waste of time – they are practice.
​
Every time we practice should be counted as a success, regardless of the outcome. I look forward to approaching my writing desk armed with this perspective, and I hope it may be useful to others.